It isn’t easy carving out meaningful time with one child. Grabbing a hot chocolate here and there, snuggles in bed, and maybe an occasional lunch is our typical approach. Even that is less frequent than we would like.

However, a few weeks ago I got the chance to take my seven-year-old daughter Anna into Chicago for one night. It was an accidental event. Mike and I had originally planned for our entire family to venture in to the city and stay in a hotel and then hit a museum on Martin Luther King Jr. Day. A treat for our hotel-obsessed kiddos. However, some behavior misfires on Sunday led to an abrupt reality check. It just wasn’t going to be a good scene if we all four went.

Mike graciously offered up that Anna and I should still go and enjoy the room. He would hang back and chill with our son. Suddenly, it was a girls(!) trip. Talk about an unexpected but awesome chance for us to get away and spend time together.

We packed our backpacks and headed out to the Intercontinental Hotel on Michigan Ave. I’m not sure I’ve seen a smile so big as the one plastered across Anna’s face when we walked into the hotel lobby. The girl digs hotels. It’s a fascination we both share and I’m so grateful for it!

The Intercontinental is very conveniently located on Michigan Ave. and has one of those traditional grand facades that I knew a kid would love. Even for those of us who live in and around Chicago, there’s still something magical about being right in the hub of activity on the Magnificent Mile. Staring up at the buildings that line Michigan Ave, seeing the trees light up as night falls over the street…it feels very big city, which is a pretty cool thing to a kid.

As we pulled up to the hotel, I saw a Dylan’s Candy Bar nearby. If you’ve never been, let’s just say that walking into this candy store is like entering Willy Wonka’s factory. It is bright, colorful and FULL of the good stuff.

I took full advantage of the car valet service (parking is a headache, am I right?) and we shot up to our room.

Walking into a beautiful and well-appointed hotel room is such a breath of fresh air for me. Clean crisp white sheets and good mattresses at a gorgeous hotel is my favorite form of relaxation. As I predicted, Anna immediately ran to the window to see the city street action from above. I can see all the cars…

After we dropped our bags off, we marched straight to Dylan’s Candy bar and grabbed some sweets (and souvenirs for the boys). Tootsie Rolls and caramels for Anna. Sour patch watermelons for me. Anna stared slack-jawed at the sheer volume of candy. Oh, the dreaminess.

When we’d procured enough sugar to rot our molars, we made a beeline back to the hotel. A lovely massive Spanish-style pool awaited us and I’d packed our goggles and swimsuits for the occasion. Water is often the magic ingredient to a good day for our kids.

Now, it would have been wonderful for both my kids to swim and play together that afternoon. However, with only one kid, I was forced to get in the water myself and actually play. Anna is in school full-time now and I don’t get the chance (or make the time) to just play alone with her very often.

A seven-year-old kid is such a funny creature. Had I not been alone with her I wouldn’t have witnessed her hilarious British accent while we played underwater tea party. Nor would I have learned that the kid has memorized word for word a funny Woody Allen skit we played in the car recently. An hour of pure play gave me the gift of just being able to absorb her funny little personality.

Tired and drenched, we took our wet towels and crazy pool hair back to the room, threw on some clothes and headed out to grab dinner. I could smell the chlorine on our skin as we exited the elevator. Who cared? Certainly, not us.

We had dinner at a nearby restaurant and then brought dessert back to our room. As we climbed into our beds with forks and dessert boxes, Anna remarked that this would be the first time she had slept in a hotel bed by herself. Usually she shares with her younger brother. I asked her if it was nice being alone or if she missed her brother.

Both, she replied. Both.

We gobbled down dessert in our jammies and watched the tail end of some old Sponge Bob movie. Then lights out.

As I fell asleep, I had such an amazing sense of gratitude that we had been able to spend this time together. It was a surprise gift.

I’d love to do this again on an annual basis. It was so good for us. Good for her to just get some time with a parent alone. Good for me to absorb her with no distractions. It wasn’t long, but it was just long enough.

Have you taken a kid to a hotel for a parent/kid night? Tell me! Where did you go? Isn’t it awesome? Let’s start a movement, shall we? 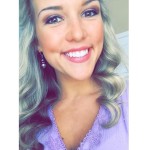 Maggie is a stay at home mom with two children in the western suburbs of Chicago. She began traveling as a college student while studying abroad in Ireland and has always dreamed of traveling with her husband and children one day. Whether it’s taking road trips or major vacations, encouraging curiosity about the world and other cultures is a top priority. Maggie believes that traveling doesn’t just mean hopping on a plane – wonderful exploration can still be found in our own backyards.

Find me on: Web

The Most Magical Luxury …

Tips for an amazing …